In early August of this year, a United Nations panel called the “Intergovernmental Panel on Climate Change (IPCC)” issued a new report, the Sixth Assessment Report, on climate change and global warming. You can explore the lengthy and technical full report here. But in short, a few key headline statements from the report include:

The U.N. report is pretty scary, especially that last bullet. But think about the severe weather events we experienced in 2020 only to be outdone by recent calamities in 2021 like the Texas deep freeze, the record heat in the Pacific Northwest, torrential floods in Europe, China and the U.S., extreme storms, not to mention the worsening forest fires.

A Time for IT to Take Action on Climate Change 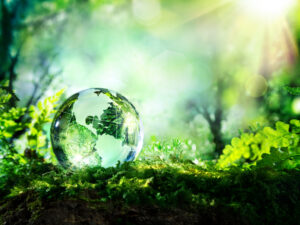 We as a society, as individuals and as commercial organizations and governments need to take action. No effort is too small, even turning off a single light switch when not needed is worthwhile. Collectively we can make a difference.

The IT industry is no exception and needs to take action. Data centers are major consumers of energy amidst rapid and widespread digital transformation initiatives resulting in exponential data growth. While the IT industry has made significant strides in ramping up renewable sources of energy, it can’t come online fast enough or cheaply enough to make a big difference. What is also needed is energy conservation and storage is a good place to start.

Assessing the Eco-Friendly Advantages of Tape

More recently, Brad Johns did an even deeper dive into the energy advantage of tape in a second whitepaper on the subject entitled: “Improving Information Technology Sustainability with Modern Tape Storage.” This time, instead of just looking at energy consumption during the operational usage phase of tape vs. HDD, Brad decided to look at the energy consumption and environmental impact of tape vs. HDD from “cradle to grave.” That is to say, from sourcing of raw materials to manufacturing, to distribution, to usage, and disposal at end of life. Here are the key findings: 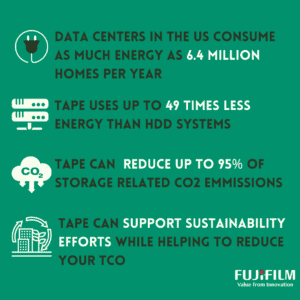 Brad also did a “what if” scenario as follows: what if industry best practices were truly observed and 60% of HDD data was moved to tape systems?

While simply using more tape for cold and inactive data won’t solve climate change or make scary U.N. reports go away, it certainly is a positive contribution to the global effort. We all need to do whatever we can so that collectively we can make a difference.