Hollywood Rebound and the 7 Starring Roles of LTO Tape

After the initial shock and disruption of the pandemic, one industry that has rebounded nicely is the world of Media & Entertainment (M&E). Hollywood, video production, and post-production companies have adapted to making films in a COVID environment. At the same time, streaming grew significantly with most of the population homebound. Services such as Netflix, Hulu, Disney+, and Paramount all reported record subscriber growth over the last 15 months…..driving up the demand for new and original content.

Today, the retention and accessibility of digital assets and video content are incredibly vital to maintaining a competitive advantage. As a result, many modern M&E companies continue to assign starring roles to LTO data tape in their workflows to combat the rising expense associated with retaining and protecting capacity-intensive high-res content. 4K, 8K, 3D, and special effects can result in petabytes of storage for a single production!

With its high capacity, reliability, interchangeability, and security, the industry standard for deliverables has long been LTO tape…..this could be anything from daily camera footage, to post/edited work, approval copies, second copies, versions, final product, archival copies, etc. LTO tape is truly a defacto standard and an accepted part of the workflow in the M&E world.

Why are leading M&E companies turning to tape?

More M&E companies are recognizing the advantages of LTO tape, which can store massive amounts of data and combat ever-increasing storage costs across production, post-production, distribution, or archiving. Tape’s starring roles include: 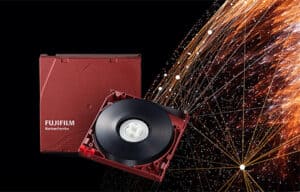 LTO tape is an ideal solution for M&E companies. LTO is an open format designed for interoperability and together with LTFS, provides easy data access and management—perfect for easy file share, high performance, and improved workflow.

So, the next time you are streaming Star Trek Discovery on Paramount+ or The Mandalorian on Disney+, just remember that somewhere along the way of the making of that show, an LTO tape played a starring role!