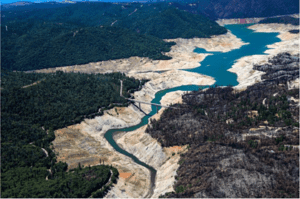 The 27th Conference of the Parties to the United Nations Framework Convention on Climate Change (COP 27) concluded on November 20, 2022 with some poignant comments by António Guterres, the Secretary-General of the United Nations:

“It will take each and every one of us fighting in the trenches each and every day.  Together, let’s not relent in the fight for climate justice and climate ambition.  We can and must win this battle for our lives”.

Reading these words inspired me to look back on the year of 2022 and acknowledge that we in the IT industry are focused on sustainability as evidenced by the trade show agendas that commonly addressed this issue.

AFCOM’s Data Center World (DCW) exhibit and conference was held in Austin, Texas on March 30th. Sustainability was one of the main themes on the agenda. It was also the topic I presented on, specifically “How to avoid CO2 emissions in long term storage with modern data tape technology”. The DCW attendees that I met and listened to are genuinely concerned about the environment and worried about what kind of planet we will be leaving behind for our kids and grandchildren. They recognize the opportunity to improve sustainability in data center operations and are committed to it. While DCW is more about facilities management than storage management, we need everyone to be advocates for any possible sustainability improvements in IT operations. So I asked my audience to lean on their colleagues in storage and pose two simple questions to them: “If data has gone cold and is infrequently accessed, why are we keeping it on energy intensive tiers of storage like constantly spinning and heat producing HDD arrays? Why not move it to eco-friendly tape?” 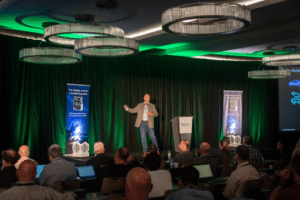 Fujifilm’s 12th Annual Global IT Executive Summit took place in San Diego in late June. This year’s Summit theme was “Optimizing storage in the post-Covid, zettabyte age” where organizations have to do more with fewer resources while the value, volumes and retention periods of data continue to increase unabated.

For those not familiar with the Summit, it is an educational conference featuring presentations from industry experts, analysts, vendors and end users about the latest trends, best practices and future developments in data management and storage.

Important data from Brad Johns Consulting was shared that showed the 18X sustainability advantage of eco-friendly tape systems compared to energy intensive HDDs. While we need both technologies, and they are indeed complementary, a tremendous opportunity exists for the storage industry to reduce carbon emissions by simply moving cold, inactive data from HDD to tape systems.

IBM also addressed the advantages of sustainable tape storage. “It’s not a question of if, but when organizations will need to seriously address carbon emissions related to storage devices”. After all: “no planet, no need for storage” commented one attendee.

Fujifilm was pleased to bring the storage industry family together from around the globe under one roof, for frank and open discussion that will help solve the challenges we and our society are facing like climate change.

I had the opportunity to attend and present on the latest in tape technology at the 16th Annual Flash Memory Summit (FMS) held in Santa Clara in early August. The title of my FMS presentation was “Leveraging Tape to Support Primary Flash Storage”. While flash technology has been around for 35 years, tape is celebrating 70 years with healthy capacity shipment forecast for tape with a CAGR of 19% according to TrendFocus. This is thanks to: the price advantage of tape compared to SSD and HDD; the CO2e advantage of tape compared to SSD, and HDD and; the reliability advantage of tape compared to SSD and HDD. All of this bolstered by the Fujifilm/IBM tape tech demos featuring Strontium Ferrite at 580 TB native capacity and the LTO roadmap now featuring LTO-14 at 576 TB capacity. But despite the many tape advantages, my closing comment was:  “It’s not about flash vs. disk vs. tape, it’s about storage optimization. Getting the right data in the right place at the right time, and the right energy profile and cost”. As an IBM executive once said, “the best way to afford more flash is to deploy tape systems”.

The OCP 2022 Summit was held in San Jose in mid-October. The theme was “Empowering Open”, but the big announcement by OCP Foundation CEO George Tchaparian was that the four tenets of OCP that have acted as guiding principles for 11 years now, namely Efficiency, Openness, Scalability and Impact are to be enhanced with a fifth tenet, and that is Sustainability. It is the mission of OCP to foster innovation in the data center industry and now sustainability must be a part of all the ideas that OCP incubates and advances. George shared his vision that the modern data center will not only be scalable, but also sustainable!

The backdrop for sustainability becoming the fifth tenet of OCP is the overwhelming evidence of climate change brought about by global warming and the increasing growth and usage of power by data centers. One speaker at a breakout session on data center power consumption said something to the effect of: “Everything humans do today passes through a data center”. How true when you stop to think about it! In his keynote address, Tchaparian shared that while data centers had consumed 1.0% to 1.5% of global electricity in the 2010s, it could swell to at best 3% and up to 13% in a worst case scenario by 2030. Going forward OCP proposals must now transparently disclose:

Clearly the data center industry and all of its associated applications and processes must go green!

IBM officially unveiled the IBM Diamondback at OCP. This highly dense and eco-friendly tape library features 27.5 PB (69 PB compressed) that fits in a standard OCP specified rack space taking up just 7.7 square feet. It’s a stand-alone “pod” of storage without expansion frames. If more capacity is needed, multiple pods can be installed. According to IBM, it’s for organizations needing to securely store hundreds of petabytes of data, both traditional and “new wave” hyperscalers that are aggregating massive customer data sets. It provides long-term storage and is designed to provide significantly smaller carbon footprint compared to flash or disk storage, and with a lower total cost of ownership. IBM’s poster presentation at OCP showed a comparison with Bryce Canyon HDD:

In summary, and quoting from IBM’s OCP poster presentation, the proper management of data must shift focus from performance-based systems to long term data storage solutions like modern tape systems. Every 27 PB of data transferred to tape for long term retention results in an energy savings capable of powering ten average U.S. homes every year.

SuperComputing 2022 (SC22) was held in Dallas in mid-November. The overarching theme of SC22 was “HPC Accelerates”. This theme highlights the advances in speed, compute power and the rising importance of High Performance Computing in today’s society to solve critical problems. But underneath that overarching theme, sustainability had a very strong presence. For example, AMD (the leader in micro-processors for super computers) was a primary sponsor at SC22 and their tag lines on show billboards included: 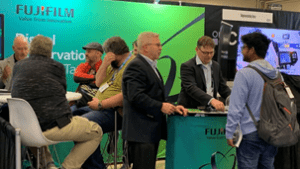 In one keynote address, Jack Dongarra presented. Jack has held positions with the University of Tennessee, Oak Ridge National Laboratory (ORNL), the University of Manchester and is the winner of 2021 A.M. Turing Award, otherwise known as the “Nobel Prize of Computing”. To quote Dongarra directly: “One of the most important challenges that the HPC community will face in the next ten years is to reduce the power costs and carbon footprint of our computing activities.”

In one well attended BOF with panelists from leading Dept. of Energy labs and other global HPCs, the discussion focused on key challenges facing the HPC community in their effort to drive down greenhouse gas emissions without sacrificing the computing power needed to support HPC projects and services. Accordingly, energy availability is becoming a crisis. In fact, there is a “grid crisis” stated one panelist. A relatively new Federal Mandate from Dec. 2021 dictates that Dept. of Energy data centers must convert to renewables by 2030 and be carbon neutral by 2050. 40% of data center electricity goes into cooling so this is a primary focus and has spurred investigation of energy efficient alternatives for data center cooling such as liquid cooling or relocating data centers to colder northern climates. Data storage is no slouch either, consuming around 20% of data center power. So retaining research data that is often irreplaceable and reaches into the Exabyte range in some locations, is becoming another challenge. As one panelist stated, “the HPC community must do every little thing to reduce energy consumption”.

The good news for HPCs and other data intensive verticals concerned about power conservation is the improving energy consumption profile of the latest generation of LTO tape. 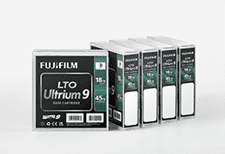 The dramatic examples of climate change brought on by global warming that we have witnessed for the past several years now  has led to changing consumer sentiment demanding that governments do more. Thankfully they are. Corporate attitudes are also changing from resistance to action on climate and we will be seeing more CSOs (Chief Sustainability Officers) being appointed and implementing change from the top down. As IBM stated at OCP, “Tape has enormous potential to reduce CO2e, energy consumption, as well as TCO, when scaled to the zettabytes of data being retained on HDDs”.

“When you take the material savings and power savings, tape actually does offer quite a bit of advantage compared to other technologies that are on the market today.”

Sustainability remains a hot issue so expect to see the topic even more pronounced throughout the 2023 trade show season. Indeed, sustainability is becoming mission critical for eco-friendly organizations across the globe and in every market vertical from hyperscale to HPC to SMB and beyond.  It is a fight that is taking place in the trenches, or make that the hot and cold aisles of data centers.