I think it’s safe to say people like surveys, probably not everyone, but most people do. Why? Experts in the field suggest that people are willing to take surveys because respondents feel their opinions are valued and that their answers will be used and may even result in a benefit to society. They feel their participation will impact something they care about, and they want to share their opinion with those who will listen and act on the information.

Surveying the C-Suite on Sustainability

So it’s not surprising that Fujifilm got a great response rate to a recently launched survey entitled Awareness Survey on Environmental Issues in the Digital Domain.  As many as 1,200 C-suite professionals responded including CEOs, CFOs, CSOs, CTOs, and CIOs from companies of 100 or more employees in the United States, Germany, Japan, and China.

The survey revealed that there is a growing awareness around broader environmental issues among corporate leaders, and that’s great news as the negative impacts of global warming and climate change keep piling up, flood after flood, wildfire after wildfire, and storm after storm.

When it comes to IT infrastructure specifically, the majority of U.S. respondents believe sustainability improvements in IT services and equipment can positively impact climate change, but 40% indicated that they did not know or were unsure if data storage can have a negative environmental impact and increase the cost of doing business.

Data storage can certainly be energy-intensive. This is a problem that is only getting worse as the value of data rises with the ability to analyze and derive competitive advantage from it. As a result, demand for long-term data retention is increasing. In fact, data to be stored is expected to grow from just 2.0 zettabytes in 2016 to 4.1 ZB in 2020 and is expected to reach 11.1 ZB in 2025 according to a recent whitepaper from IDC. Just one ZB is a vast amount of data equal to one million petabytes that would need 55 million 18 TB hard disk drives (HDDs) or 55 million 18 TB LTO-9 tapes to store. The environmental impact of the energy required to support this volume of storage is greatly underestimated, as are the associated carbon emissions. When asked in the survey what barriers exist for those who have not considered more eco-friendly data storage options, 31% in the U.S. cited a lack of awareness or understanding of the issue.

There was also a lack of awareness pertaining to frequently accessed “hot” data and less frequently accessed “cold” data, with 36% of respondents saying they either don’t or are unsure if they differentiate between the two. And 35% don’t realize that differentiating between hot and cold data can impact sustainability, affordability, and security. An interesting fact about data is that it quickly goes cold and access frequency drops off significantly after just 30, 60, or even 90 days. In fact, industry analysts estimate that 60% to 80% of all data stored is cold and qualifies as “archival”. Yet through inertia, that data often remains on energy intensive, constantly spinning and heat-producing tiers of storage like hard disk drives.

Reducing Energy Consumption and CO2 Emissions with Tape
To help increase awareness and understanding of this issue, a number of whitepapers have been published highlighting alternative options for storage including LTO data tape. A recent IDC whitepaper shows how migrating cold data from HDDs to LTO tape can reduce data centers’ CO2 emissions by 43.7% by 2030, avoiding 664 M metric tons of CO2 cumulatively. Other research shows that tape consumes 87% less energy than equivalent amounts of HDD storage. When CO2 emissions are analyzed over the entire product lifecycle (from raw materials to production to distribution, usage, and disposal) of HDD and tape, studies show a 95% reduction in CO2 in favor of tape compared to HDD. The same study shows Total Cost of Ownership for long-term data storage can be reduced by more than 70% using tape instead of HDD. All of this is possible by taking a storage optimization approach, where data that has aged and is infrequently accessed, otherwise known as cold data, gets moved from expensive primary storage like solid-state flash drives and HDDs to economical and environmentally friendly tape systems.

As far as security is concerned, tape is also playing a role in cybercrime prevention with air gap capabilities, WORM, and encryption. Intelligent data management software, typical in today’s active archive environments, can automatically move data from expensive, energy-intensive tiers of storage to more economical and energy-efficient tiers based on user-defined policies. By moving inactive data out of primary storage, the ransomware attack surface can also be reduced.

Renewable Energy Plus Conservation
Another interesting point from the survey reveals that 51% of participants said that their companies are using renewable energy to reduce carbon emissions, while 22% said they are doing so via 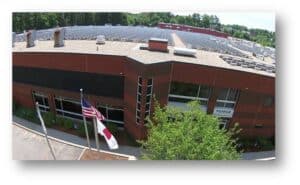 climate protection projects and 13% through carbon offsets. Renewable energy is a key factor in reducing CO2 emissions and Fujifilm is a fan (see photo at right of our LTO plant in Bedford, MA). But alone renewables likely can’t come online fast enough or cheaply enough to keep up with data growth rates of between 30% – 60% annually in major data centers today. That’s why conservation has to be part of the equation. The very first metric to be analyzed in data center energy efficiency is simply the amount of energy that’s being consumed.

Alternative Data Storage Options
Finally, 81% of respondents noted that they would consider an alternative data storage option that is more sustainable and affordable. That option exists in the form of today’s modern and highly advanced data tape systems that offer the lowest energy consumption and cost profile. Add to that its best-in-class reliability rating of any storage media and longest archival life. So for the benefit of society, let’s act on the information that the survey reveals. It’s really just a question of getting the right data, in the right place, at the right time.

In a World of Storage-busting Data Growth, Active Archiving Can Save the Day—and Your Data