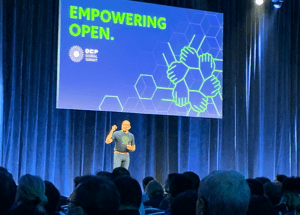 I had the privilege of attending the OCP 2022 Summit held in San Jose last week with the theme of “Empowering Open”. I say privilege because it was inspirational for me, and I suspect for many of the 4,000 or so attendees as well. The reason for that was the announcement by OCP Foundation CEO George Tchaparian (pictured at right) that the four tenets of OCP that have acted as guiding principles for 11 years now, namely Efficiency, Openness, Scalability, and Impact are to be enhanced with a fifth tenet, and that is Sustainability. It is the mission of OCP to foster innovation in the data center industry and now sustainability must be a part of all the ideas that OCP incubates and advances. George shared his vision that the modern data center will not only be scalable but also sustainable!

So What is OCP?

In case you are not familiar with it, The Open Compute Project Foundation (OCP) was started in 2011 with a mission to apply the benefits of open source and open collaboration to hardware and rapidly increase the pace of innovation around the data center’s networking equipment, servers, storage devices and appliances, and scalable rack designs. OCP’s collaboration model is being applied beyond the data center to include the telecom industry and EDGE infrastructure.

The Open Compute Project Foundation is a rapidly growing, global community whose mission is to design, use, and enable mainstream delivery of the most efficient designs for scalable computing. OCP believes that openly sharing ideas, specifications, and other intellectual property is the key to maximizing innovation and reducing complexity in IT components.

According to George Tchaparian, the OCP ecosystem impact in 2021 was worth $18 B and is expected to grow to $36 B by 2026. Today, over 300 members and more than 5,000 active participants share their intellectual property with others and encourage the IT industry to evolve. Some 286+ OCP contributions including specs, designs, white papers and more have already come to fruition. The board of OCP includes tech giants like Intel, Google, Microsoft, and Meta. The multi-faceted agenda of OCP includes computing but also data storage and many of our storage friends are actively involved including IBM, HPE, Dell, Seagate, and Western Digital just to name a few.

The backdrop for sustainability becoming the fifth tenet of OCP is the overwhelming evidence of climate change brought about by global warming and the increasing growth and usage of power by data centers. One speaker at a breakout session on data center power consumption said something to the effect of: “Everything humans do today passes through a data center”. How true when you stop to think about it, and how scary! In his keynote address, Tchaparian shared that while data centers had consumed 1.0% to 1.5% of global electricity in the 2010s, it could swell to at best 3% and up to 13% in a worst-case scenario by 2030. In another keynote address, the speaker shared that recent limits and moratoriums on data center expansion are now in effect in Ireland, Amsterdam, Singapore, Frankfurt, and London due to energy consumption concerns. Furthermore, the industry now has to be concerned with Scope 3 carbon emissions that happen during equipment manufacture in addition to Scope 2 emissions that happen in the usage phase. The industry must now measure “embodied carbon”, the GHGs that are released in the production, transportation, and disposal of IT equipment. “Circularity” is another buzzword, can we “Reduce, Reuse and Recycle” IT equipment and materials? Going forward OCP proposals must now transparently disclose:

Clearly, the data center industry and all of its associated applications and processes must go green! 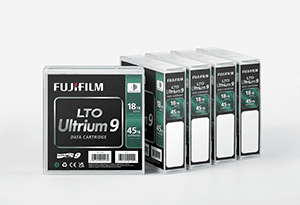 In one breakout discussion on sustainability, participants at OCP agreed that if carbon reduction can also save money, that’s low-hanging fruit and should be pursued first to help pay for other projects. Clearly, sustainability not only remains a hot issue (no pun intended), it is becoming mission critical for eco-friendly organizations across the globe and in every market vertical. 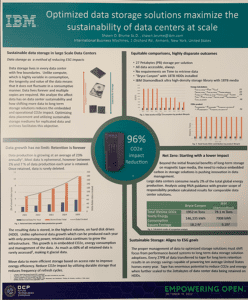 ially unveiled the IBM Diamondback at OCP. This highly dense and eco-friendly tape library features 27.5 PB (69 PB compressed) that fits in a standard OCP-specified rack space taking up just 7.7 square feet. It’s a stand-alone “pod” of storage without expansion frames. If more capacity is needed, multiple pods can be installed. According to IBM, it’s for organizations needing to securely store hundreds of petabytes of data, both traditional and “new wave” hyperscalers that are aggregating massive customer data sets. It provides long-term storage and is designed to provide a significantly smaller carbon footprint compared to flash or disk storage, and with a lower total cost of ownership. IBM’s poster presentation at OCP showed a comparison with Bryce Canyon HDD:

In summary, and quoting from IBM’s poster presentation, the proper management of data must shift focus from performance-based systems to long-term data storage solutions like modern tape systems. Every 27 PB of data transferred to tape for long-term retention results in an energy savings capable of powering ten average U.S. homes every year. Tape has enormous potential to reduce CO2e, energy consumption, as well as TCO, when scaled to the zettabytes of data being retained on HDDs.

Executive Q & A with Jim Ghelfi, Head of Hyperscale Accounts

In a World of Storage-busting Data Growth, Active Archiving Can Save the Day—and Your Data

Avoiding Potential Risk of Stagnation in the Secondary Storage Market